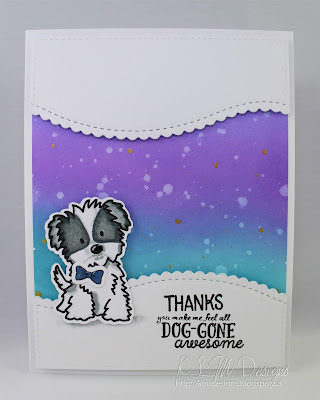 Happy Saturday and thanks for stopping by, todays card is a cute little puppy from the Every Elle Furry Friends Set. I was asked to create this card for a dog groomer, for always making their little fur baby look so handsome.

I first stamped the dog image and die cut it out with my die cutting machine. I then ink blended the background with four shades of distress oxide inks and spritzed it with water and splattered it with gold mica paint then set it aside to dry. I then die cut two panels out of white cardstock and stamped the sentiment with crisp black ink and clear heat embossed it. The panels were then foam taped to the background.

The panel is then mounted onto a side folding white card base. And our adorable puppy is pop dotted onto the card, glossy accents and sparkling nuvo gloss is added for details. That completes are card for today.

Have a safe and great long weekend, Happy Canada Day!

Posted by Krysta at 8:17 AM No comments: Links to this post 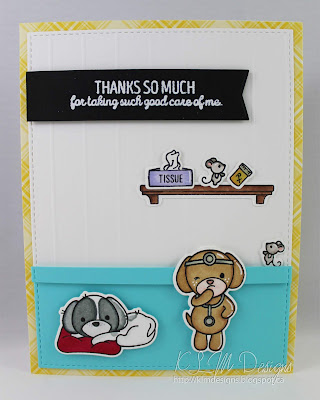 Today I'm sharing a card that I was asked to create for a Veterinarian. I wanted to make the scene fun and cutesy.

I started by stamping my images and colouring them in with Copic markers. I then made the background panel by scoring the paper with half inch score lines to make the look of paneling. I used aqua blue cardstock for the counter, I added a strip of paper with foam tape to the very top to create an edge. Some of the stamped images are glued flat and some are pop dotted for added dimension.

The sentiment is stamped and white heat embossed on black cardstock. The panel is adhered to yellow cross hatched gingham paper and mounted onto a side folding card base. White gel pen is used to make high lights and glossy accents are added for details. And that completes our card for today!

Posted by Krysta at 10:21 AM No comments: Links to this post 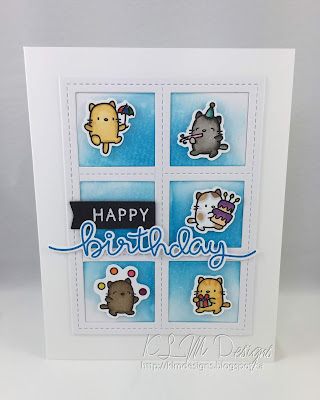 To begin my card today, I started off by stamping my cat images. Once they were all stamped out I coloured them in with Copic markers and cut them all out with my cutting machine. I also cut the Die-namics Blueprints 27 frame from some white cardstock. The word "birthday" was stamped and die cut and the sentiment was white heat embossed on black cardstock and set aside.

I moved onto create the background, with distress oxide ink mermaid lagoon and the square inserts from the frame. I ink blended from the centre outward and left the edges white. I adhered the frame onto the card base and started assembling the card. All the elements were pop dotted onto the card and the phrase was liquid glued onto the frame.

That finishes my card for today thanks for stopping by,

Posted by Krysta at 2:00 PM No comments: Links to this post 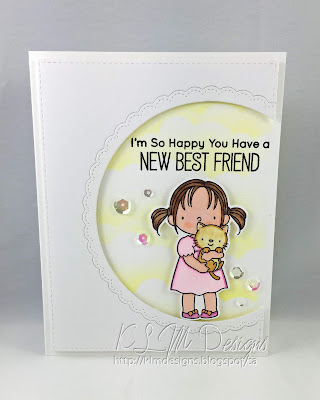 Happy Friday, it is officially summer the weather is hot, the bugs are biting and today is the last day of school! Today's card is a pet rescue or adopting into the family card.

I started off by stamping the image and colouring it with Copic markers. Next I die cut a panel using the Sunny Studio Fancy Frames Circles Die and setting that aside. I then took a white side folding card base and the MFT Mini Clouds Stencil and Squeezed Lemonade Distress Oxide Ink and stenciled clouds for a background.

The sentiment is stamped with crisp black ink, and the stamped image is then pop dotted and sequins are added for some bling. White gel pen, glitter gloss pen, and glossy accents are added for little bits of detail. And that completes are card for today!

Posted by Krysta at 10:53 AM No comments: Links to this post 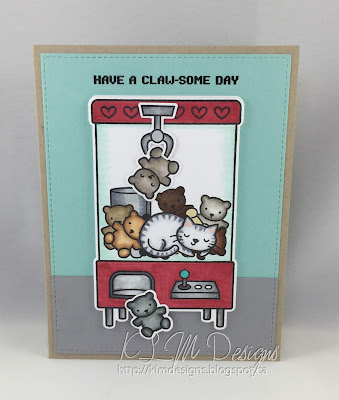 Posted by Krysta at 11:00 AM No comments: Links to this post